Magnesium Side Effects
Are Very Common
But Easily Managed

While Magnesium Side Effects are actually relatively common, they are easily managed and are not a reason to have to stop taking magnesium. Magnesium is a vital nutrient in the body that is obtained mainly from fruits and vegetables. It is considered an 'Electrolyte', meaning that it helps to carry electrical impulses throughout the body. It is present in VERY large amounts INSIDE of each and every single cell in your body and its movement out of and back into the cells is what makes muscular contraction and thought even possible.

But blood levels don't test for the amount of magnesium INSIDE the cells- which is where the vast majority of magnesium is. So your Magnesium Level in your blood is not a valid test to determine the need for magnesium, despite its routine use by doctors and in hospitals. Additionally, Calcium Side Effects can push magnesium out of the cells, leading to a 'relative' magnesium deficiency.

Magnesium Side Effects
From Supplements

While the side effects ARE common, a little bit education can completely eliminate these problems – or even make magnesium side effects become USEFUL and beneficial to your health! The side effects of magnesium are common for every single supplement and drug in the world and are often at the same rate as for placebo drugs. These include nausea and vomiting.

One way to reduce the chance of gastrointestinal problems is by using Jigsaw Health's Extended Release Magnesium Malate. The extended release formula is designed to lessen your chances of diarrhea while giving you better absorption and effectiveness.

Magnesium has been well- studied in many research trials and these show that magnesium has an extremely low number of side effects and an AMAZINGLY good safety profile with virtually the only people ever reporting Magnesium Overdose are those with kidney problems or those who have received inappropriate dosing by the intravenous route in hospitals.

That one Side Effect is loose stools or diarrhea. Occasionally this occurs with abdominal pain or cramping, but most of the time, it is simply loose stools at higher dosages. For some who are already have regular bowel movements or are prone to loose stools, this could be a problem. For those who are prone to constipation, however, it is likely that your constipation is a Sign of Magnesium Deficiency anyway, and therefore taking magnesium could remedy this problem for you. 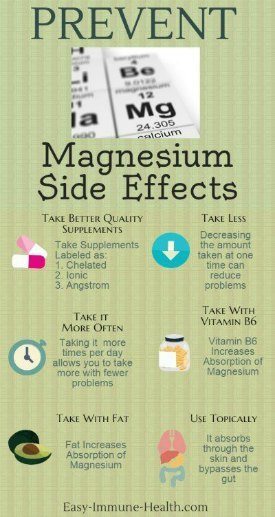 In addition, Mother Earth Minerals Angstrom Magnesium is an oral formulation that seems to nearly eliminate gastrointestinal problems. 'Angstrom' minerals have been specially formulated so that the particles are extremely small and thus easy for you to absorb them. Give it a try if you have trouble absorbing or tend towards having loose stools. You can also get more information about magnesium and the side effects of magnesium from the Nutritional Magnesium Association.

Intravenous Magnesium Side Effects
Magnesium Sulfate is often given in hospitals by infusion directly into a vein, and side effects do occur when magnesium is used as a medication in this way. As with all medications given by the intravenous route, there is always the chance of allergic reactions and pain or infection at the infusion site. But magnesium side effects are fairly rare even when given this way.

The side effects of magnesium given intravenously are:

All in all, there are few magnesium side effects when it is given intravenously or when taken by mouth.

For those of you who still have Signs of Magnesium Deficiency despite having loose stools, you can:

Any of these strategies can get you extra magnesium if you get loose stools on a very low dose of magnesium. This is because magnesium is easily absorbed right through the skin and into your bloodstream. Those who are severely magnesium deficient can notice a difference in their sleeping or in their pain levels after the first time that they use Magnesium Oil or take an Epsom Salt Bath- that is how powerful magnesium is as a drug.

When You Should Avoid Taking Magnesium
If you take too much Magnesium, there is always the chance of a Magnesium Overdose, so you should be aware of those symptoms if you are taking magnesium supplements.

Anyone with impaired kidney function for ANY reason should NOT take magnesium until they are specifically told to do so by their doctor. If you have:

You should also NOT take magnesium if you currently have an excessively slow heart rate, myasthenia gravis or a heart condition called Atrial Fibrillation unless you specifically get instructions from your doctor to do so.

While there are a few reasons, outlined above, to avoid taking magnesium- the truth is that the vast majority of people with chronic illnesses are suffering from Signs of Magnesium Deficiency and can benefit from extra magnesium- either in your diet or in the form of supplements.

But if you are already magnesium deficient, you would need to become a vegan to get the large amounts of magnesium that you would need in order to replace your low magnesium stores. But for most people, simply taking Magnesium Supplements is the better choice. If this is a better choice for you, then keep reading to find out the right Magnesium Dosage...