Osteoporosis Drugs
Lead to Worse Fractures
Than Without the Drugs

Osteoporosis Drugs, also called Bisphosphonate Drugs, are pharmaceutical drugs that are given to those with osteoporosis and are said to 'build' bone and make them 'stronger'. However, this is not necessarily true.

The way that osteoporosis drugs ACTUALLY work is by suppressing the 'resorption' of old, worn out bone tissue so that bone LOSS slows down. While slowing the loss of old worn-out bone loss sounds like a good idea, it's actually a VERY bad idea. This is because the worn-out bone tissue would have been replaced with new healthy bone by the body.

In osteoporosis, the new bone might be slow growing or not as strong, but it would still be bone tissue that could potentially be stimulated to grow. But in the case of Osteoporosis Drugs, as time goes on, more and more of your bone tissue becomes older and worn out.

Unfortunately, old bone tissue is 'denser' even though it is less healthy and more brittle, so even though your bones will LOOK like your bone density is 'improving' on a bone density or DEXA scan, what is really happening it that your bones are simply getting harder and less flexible- but not healthier. Your bones have not been 'stimulated' to grow, but have been hardened and made more brittle

This is really an important concept to understand because harder bones make for MORE fractures- not less like the drug companies want you to believe. And sure enough, long-term studies show that people taking Osteoporosis Drugs are having dangerous fractures- like upper leg femur fractures- that people with osteoporosis don’t normally get!

The femur, the long bone in the upper part of the leg, is one of the strongest bones in the body and one of the most difficult to break. The most common cause of femur fractures is trauma and it generally takes an extremely forceful event to cause a femur fracture. Except in extremely rare cases, a non-traumatic Broken Femur is almost unheard of. Yet thanks to osteoporosis drugs, they are becoming more and more common.

Yet, as more and more prescriptions are given every year, more and more reports of unusual fractures are being reported. Are you willing to take one of these Bisphosphenate drugs when they actually can CAUSE fractures? Additionally, many people who take these drugs also take Acid Reflux Medication, which can contribute to malabsorption of calcium and osteoporosis, increasing your chances of osteoporosis even further!

Osteonecrosis of the Jaw

Osteonecrosis of the jaw is another side effect that, up until recently, was almost completely unheard of except in cases of bone cancer or severe infection. This condition really is as horrible as it sounds.

It is a condition where the bone of the jaw actually dies- requiring extensive surgery to regain normal function. Yet this condition is associated with these drugs so closely that the condition is often called 'Bisphossy Jaw' for the 'Bisphosphonate' class of osteoporosis drugs.

A study looking at the incidence of osteonecrosis of the jaw across many different studies concluded that the devastating condition was rare but 'warrants careful monitoring'. And in fact in this 'Position paper of the American Academy of Oral and Maxillofacial Pathology', this organization states in no uncertain terms:

"All sites of potential jaw infection should
be eliminated before bisphosphonate
therapy is initiated."

Yet this almost never happens. People with osteoporosis are just not sent for an in-depth dental evaluation before they are started on Osteoporosis Drugs- were you? With an incidence of ONJ being almost 0% for the drug clodronate to up to 4% as one of the Reclast Side Effects, osteonecrosis of the jaw could affects tens of thousands of women around the world! 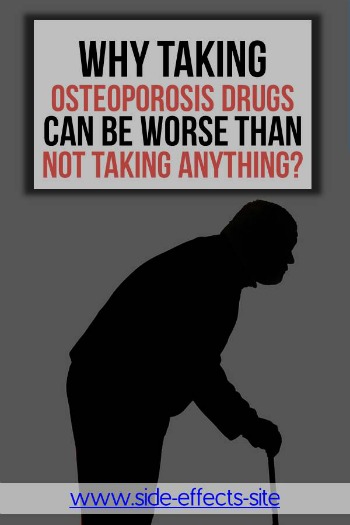 And the fact that an official medical organization recommended a dental exam before starting therapy, if you DO get osteonecrosis of the jaw and did NOT have 'all sites of potential jaw infection eliminated' as the American Academy of Oral and Maxillofacial Pathology recommends, then this could be considered negligence on the part of the doctor prescribing these Bisphosphenate Drugs.

Additionally, it's become a common practice for dentists to ask if you are taking a bisphosphenate before they start any dental treatments, as these drugs can prevent effective dental treatments.

While Osteonecrosis of the jaw IS a rare condition, it would be rarer still if people were sent for an extensive dental examination before starting on these drugs. And while it is rare, it certainly is an incredibly devastating side effect of bisphosphenate drugs.

And these are only just a few of the more serious side effects of Osteoporosis Drugs, they can also cause severe gastrointestinal problems and other Common Side Effects as the vast majority of drugs can- and even death, as the story from the Reclast Side Effects page tells. There ARE alternatives to bisphosponate drugs, but unfortunately the rise of the use of calcium is not a good alternative, since Calcium Side Effects have serious downsides as well, including a higher risk of heart disease and Alzheimers, while not actually preventing bone loss!

And since osteoporosis is one of the Symptoms of Vitamin D Deficiency, making sure that you are taking enough vitamin d is IMPERATIVE. How much is enough? Keep reading to find out what an optimal vitamin d level is...

Back to Top of Osteoporosis Drugs