Which Niaspan Side Effects
Should Concern You

Are the Niaspan Side Effects worth it to get the benefits of taking this cholesterol lowering drug? Niaspan is a long-acting pharmaceutical preparation of the B vitamin called Niacin.

Niacin and Niaspan, also called Nicotinic Acid and Vitamin B3, are used for the control of cholesterol levels. While there are many 'cholesterol lowering' drugs, namely the drug class known as 'Statins', niacin preparations are the only substances that are known to RAISE the 'Good Cholesterol levels known as HDL good cholesterol.

While there is much talk in the health world about cholesterol reduction, there are few who are discussing the fact that humans NEED cholesterol, and we especially need the High Density Lipoprotein particles known as HDL Good Cholesterol that serve to help us perform many bodily functions such as:

In addition, HDL good cholesterol is a 'precursor' to every hormone in the body; in other words, cholesterol is one of the raw materials from which ALL hormones are made. While cholesterol often gets a 'bad rap' as being disease-causing, the opposite side of the coin is that HDL good cholesterol is EXTREMELY beneficial for health. It's so beneficial that it has even been called "a pivotal defense mechanism against atherosclerosis"- no one ever tells you that cholesterol can be a DEFENSE against heart disease, and this is where Niacin preparations like Niaspan come in. 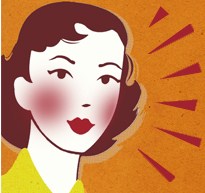 While side effects of Niaspan include flushing of the skin, Niaspan is a SIGNIFICANT improvement over the over-the-counter B vitamin niacin which causes severe flushing.

Let me explain the term 'Flushing', though, because it is a unique experience that comes from niacin and can be frightening if you are unprepared for it. But first let me say that Niaspan side effects of flushing are HARMLESS and TEMPORARY- lasting usually less than half an hour.

As an emergency room nurse for many years, I have seen a few people who are unprepared for this flushing, or who are unaware that they have taken niacin that panic and come to the Emergency Department only to have their reaction subside just about the time that they get undressed and sit down to see the doctor. I've also seen HUNDREDS of people's charts that CLAIM that they are allergic to niacin. A true allergy to Niacin is rare, and most people simply experience temporary flushing and itching.

While many people claim that flushing is uncomfortable, I personally take short-acting niacin (but not Niaspan) occasionally, and I actually find the sensation pleasurable. While it may be a little strange, just because the sensation is intense and quite different doesn't automatically make it uncomfortable. If you happen to experience these Niaspan side effects, attempt to experience it without judgment, 'bad' or 'good', and just notice what it feels like. You might find it enjoyable too!

While the side effect of flushing is GREATLY reduced using Niaspan in comparison to over-the-counter niacin, unfortunately the advantage of the 'no flush' goes away in the fact that Niaspan increases the incidence of liver enzymes which could potentially lead to liver damage- particularly in those who have liver problems already, have hepatitis and/or drink alcohol regularly. The 'over-the-counter' niacin that causes a flush is far safer than the 'no flush' Niaspan, and the side effect of flushing from niacin goes away after a week or two of use.

Summary of Niaspan Side Effects

While the Niaspan Side Effects of flushing are the most common problems, this can often be remedied by taking Aspirin 1/2 hour before taking Niaspan, and taking the preparation at bedtime.

In any case, flushing is harmless and temporary. And while there is the possibility of liver problems, Niaspan seems to very much have a favorable 'Risk to Benefit' ratio for those who may benefit from a higher HDL cholesterol level.

References Used for Niaspan Side Effects

Back to Top of Niaspan Side Effects