What You Should Know About
Antibiotic Side Effects

Many side effects are common to ALL drugs- including antibiotics- and are discussed on the Common Side Effects page. It would be impossible to discuss ALL of the many varied antibiotic side effects and drug interactions such as when you take Antibiotics with Iron   because there are so many, but we will attempt to discuss the side effects that are unique to antibiotics as well as those unique to certain classes of antibiotics when they are unusual or of great interest to you.

The Most Common
Antibiotic Side Effects

When antibiotics are given, they not only kill the bacteria that are causing your problem, but they also kill the Good Bacteria in your digestive tract. While this may not cause ANY symptoms or problems in some people, in others, it can lead to conditions such as:

Some of these issues can cause people to have serious medical problems, many of which western medicine does not recognize, and these end up becoming 'incurable' chronic illnesses that have become extremely common. But most of these problems would not occur if High Quality Probiotics were taken during and after antibiotic administration.

The Quinolone Antibiotics are a a group of antibiotics that have gained widespread use in the past few years- but not without their problems. You will know that you are taking this type of antibiotic if it ends in:

The most common of these drugs are:

These drugs have a SCARY history with MANY problems associated with them, yet they are very often considered 'safe' and are given for even fairly minor infections that many researchers believe are not even bacterial infections -and therefore should not be treated with antibiotics in the first place!!

This class of antibiotics has so many Uncommon Side Effects, like skin cancer and Cipro Tendonitis, and they have so many peculiarities and serious Levaquin Drug Interactions, such as that between Levaquin and Prednisone, that I've written many many pages exclusively on the dangers of this class of antibiotics. In fact, there are entire websites dedicated to educating people about the dangers of the Fluoroquinolone antibiotics, such as FQ Research.

The BIGGEST of the Sulfa Antibiotic Side Effects is an allergic reaction. There are SO many people with allergic reactions to sulfa drugs that this is a MAJOR concern. If you know that you have an allergy to sulfa drugs then you should inform your physician and never take them. Ideally, you should wear a Medic Alert bracelet in case you are ever in an accident and are unable to tell anyone about this allergy.

Sulfa allergies range anywhere from mild rashes to full blown emergency Anaphylactic Reactions. If you have had an allergic reaction to sulfa drugs before, it COULD be worse the next time, so never take a chance and be sure that you never take sulfa drugs again. In fact, it's prudent for anyone with a drug allergy to get a Medic Alert Bracelet in order that medical professionals are notified of your allergy in an emergency. 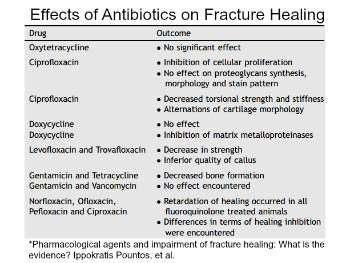 We could go on and on about antibiotic side effects and outline side effects that you would never have considered could be a problem, such as Impaired Bone Healing from Antibiotics. Even these 'safe' routine drugs can have serious consequences for some people. Could you be the next one to suffer from taking a simple antibiotic? Do you want to find out?