Side Effects of Levaquin
Can Be Completely Debilitating

Side Effects of Levaquin can range from mild to completely debilitating. Is Levaquin the best choice for your problem? Levaquin, also called Levofloxacin, is a powerful antibiotic drug that is part of one of the Quinolone Antibiotics that also include:

Levaquin is very effective at killing the bacteria that cause different types of infections- but it is used most commonly for infections such as:

and it is also used for a variety of other infections and can be given in a powerful intravenous form in the hospital as well as in pill form for people to take home with them.

Side Effects of Levaquin

Just like the Side Effects of Cipro, its close cousin, the Side Effects of Levaquin are many and varied. They range from people having no side effects, to the mild nausea that can accompany any and every drug that is prescribed- all the way to debilitating and life-changing side effects that can put you in a wheelchair for life. Even though the numbers of people that get these devastating side effects of Levaquin is small- there is just simply no way of knowing WHO is going to be affected by them- and several other Quinolone Antibiotics have been pulled from the market for causing serious health issues. So, could it be YOU who gets these serious side effects of Levaquin?

Rate of the Side Effects of Levaquin

While the article entitled the Comparison of side effects of levofloxacin versus other fluoroquinolones claims that Levaquin has the lowest rate of Adverse Drug Reactions (ADR's) compared to the rate of side effects of OTHER fluoroquinolones, this doesn't mean that the rate is necessarily 'low', only low "in comparison" and certainly a 'low' rate doesn't tell you anything about the severity of those problems that do occur.

"Within the NDA (new drug application) for
levofloxacin (Levaquin) we find clinical studies that
revealed an adverse drug reaction (adr) rate in
excess of 40%...and a number of listed fatalities.
We find these same numbers with all the NDAs for this class.
This tendon issue we are now discussing
was first revealed to the FDA back in 1982 (bailey et al)."
David Fuller of FQ Research

One of the most controversial and most debilitating side effects of Levaquin is tendon pain and/or even tendon RUPTURE! While this sounds crazy and improbable- it is so prevalent that there is an FDA Black Box Warning, the strongest warning possible- on Levaquin to warn of Achilles Tendon Rupture and Levaquin Tendonitis!

The problem with Levaquin Tendonitis is that cytotoxicity from the Levaquin antibiotic doesn't -just- damage tendon. Researchers aren't exactly sure how Levaquin damages connective tissue, but it appears that fluoroquinolones actually damage the DNA structure of the tendon and possibly other connective tissues as well- which can cause pain and weakness throughout the entire body- and even be mistaken for Symptoms of Fibromyalgia.

What's the Solution
To Levaquin Tendonitis?
Click Here to Find out

While we've developed an intensive program called the 'Levaquin Tendonitis Solution' to help people suffering from this problem, it can be EXTREMELY damaging and we are doing are best to teach people how to avoid this problem entirely. While some people seem to heal spontaneously, others have pain, weakness and many other symptoms for LIFE. For more information on this topic see Levaquin Tendonitis Treatment page.

One of the most deadly side effects of Levaquin is a condition called Prolonged QT Interval. This is an extremely subtle, yet potentially deadly heart rhythm that can lead to Sudden unexpected death from heart changes.

This is NOT like a 'heart attack' where you get chest pain, sweating and other heart attack symptoms. This is the same condition that causes teenage athletes to suddenly die while playing basketball for no apparent reason.

While this Levaquin Side Effect is EXTREMELY rare, again, there is absolutely no way of knowing ahead of time who is going to be affected by this deadly problem.

One common, but very subtle Side Effect of antibiotics that most people are at least somewhat aware of are their ability to kill off the Good Bacteria in the digestive tract. Many women experience these side effects of Levaquin as a vaginal candida infection.

But a vaginal infection is only the most NOTICEABLE problem. Every single time that anyone takes antibiotics, it kills off a portion of the good bacteria in the intestine and leaves 'bad' organisms to flourish in their place. One of these 'bad' bacteria can lead to a condition called 'Antibiotic Colitis' that is due to the overgrowth of a bacteria called 'Clostridium Difficile'.

A C Difficile Infection can lead to diarrhea, bloody stools, stomach cramps, fever and even intestinal damage. These Levaquin Side Effects, which are often not recognized by doctors, can even occur MONTHS after you have finished your antibiotics and lead to chronic digestive problems that can go unrecognized for years and even require surgery to correct!!

This Levaquin antibiotic side effect is easy to avoid. Read the C Difficile Infection page to find out more about how to avoid and get rid of these common Levaquin Side Effects.

While antibiotics are often prescribed in large numbers by doctors in offices and in hospitals for many many reasons, just because they are prescribed does NOT mean that they are needed! Many researchers now believe that antibiotics are being prescribed for conditions that are likely to resolve on their own and never needed antibiotics in the first place. While you need to do your own research and discuss alternatives with your doctor, there ARE some alternatives to antibiotics for certain conditions. While these are NOT medical recommendations, they ARE alternative possibilities for you to research and discuss with your doctor. For instance:

Urinary Tract Infections: While these ARE bacterial, a natural substance called Vibrant Health Mannose and Botanicals U.T. Vibrance Crisis Intervention Formula has properties that prevent the bacteria in the bladder from STICKING to the bladder walls. The bacteria can't grow in the bladder and can be completely eliminated in 24 to 72 hours. There is just virtually no reason to take antibiotics for simple uncomplicated urinary tract or bladder infections when you can at least try out D-Mannose for a day or two first.

Sinus Infections: Are most often NOT bacterial and do NOT respond to antibiotics anyway. Using a device called a Neti Pot that irrigates your sinuses can improve drainage and help to relieve sinus pressure.

What's the Solution
To Levaquin Tendonitis?
Click Here to Find out

With the risks of side effects of Levaquin such as sudden death and Levaquin Tendonitis are EXTREMELY SMALL, they are 100% if it happens to be you or your family that is affected. With more and more researchers and doctors recommending antibiotics only for life-threatening conditions, only you can decide if the risk of Levaquin Side Effects are worth the benefits.

Keep reading to find out more about the Quinolone Antibiotics and why its a good idea to avoid them... 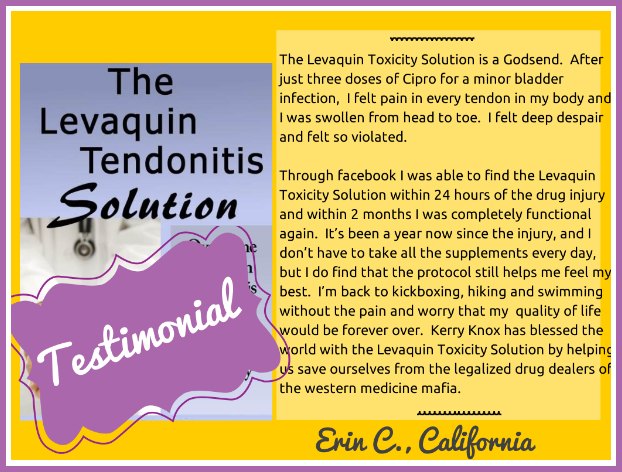 Back to Top of Side Effects Of Levaquin

If you have symptoms of Levaquin Tendonitis or other side effects of Quinolone antibiotics, tell us your story or ask your question. Whether it's funny, sad, tragic or heartwarming- we want to hear it!!

IMPORTANT: You MUST leave your email address in order to get a response!!! I promise, it will NOT be shown nor will it be used for any other purpose!

See Other Submissions about Levaquin Tendonitis and Quinolone Antibiotics

Organs Malfunctioning After Just One Dose of Levaquin
10 days ago I took one dose, 500mg levaquin for chronic sinus infection. Within 3 hours I couldn’t form a sentence properly and was mixing my words. My …

I'm So Grateful You Published This Info About Levaquin
I was prescribed Levofloxacin (Levaquin) yesterday for a persistent sinus & lung infection. I always research a new medication prior to ingesting it, and …

Are My Vision Problems from Taking Levaquin?
Sunday afternoon, October 9, my vision became "damaged" . . . I am wondering if the 4-6 rounds of Levaquin I took from January to May could be the cause. …

QUESTION OF DRUG INTERACTION ??
I HAVE A SEVER SINUS,UPPER RESPIRATORY INFECTION WHIZ WHEN I TAKE DEEP BREATH. I AM WAS TAKING 1 PREDISONE 20 MG TWICE A DAY WITH FOOD FOR …

Side effects of Levaquin and Prednisone
I was recently prescribed levaquin for pneumonia. I also have had crohns disease for over 40 years. I was taking 60 mg daily prednisone when I started …

Levaquin Caused Severe Joint Pains
I have been given levaquin on 4 occasions.EVERY time its been given me iv I've ended up with a new problem where there was NO problem before. First time, …

Fibromyalgia is Worse After Taking Levaquin
I am at my wits' end! I took a full 10 days of levaquin. I didn't have a shoulder problem beforehand. I swim laps on a regular basis and as soon as my …

3 1/2 year delayed Levaquin reaction?
I took two doses of Levaquin 3 1/2 years ago. Hours after the second dose, my achilles tendons got extremely stiff and sore. The pain and stiffness lasted …

Tendon Fibers Snapped in My Calf After Taking Levaquin
I was treated with levaquin in january of this year, about three days after taking it i started to get sharp pains in my legs, this got worse as the week …

Having a Bad Reaction to Levaquin
I was given a course of 750mg of Levaquin for severe hacking cough and pneumonia-like symptoms that had gone on for 6 weeks. After taking the second dose, …

Reactions After Taking Cipro and Levaquin
Wow, what a breakthrough today. Let me start from the beginning. Last year I developed what was thought to be a urinary tract infection and was given …

My Personal Battle With Levofloxacin
I am a 27 year old male suffering from Levofloxacin poisoning. I took a 500 mg pill on August 29th, 2012 and again on August 30th before having a nauseous …

Getting Worse Every Day After Taking Levaquin
I was admitted to the hospital for a kidney infection on July 13. I was given 1500mg of Levaquin by IV for 4 days and sent home with another 7 days of …

My Body Is On Fire After Taking Levofloxacin
I had a sinus infection and was prescribed Levofloxacin for 10 days. After the 7th day, I started experiencing severe pain and pressure on my back around …

Reaction of hives to Levaquin
A few years ago, I was given a prescription for Levaquin by a dentist who said I had an infection in my mouth. I do not know why he did not just prescribe …

Levaquin side effects...
I took Avelox last Monday to get rid of bronchitis and after just my first pill I fell into a deep depression. I didn't think anything of it and took …

Pain and Swelling after Taking Levaquin
I DO NOT KNOW IF THAT IS WHAT I HAVE, BUT I HAVE DIVERTICULITIS, AND THIS IS THE 2ND OR 3RD TIME I HAVE TAKEN LEVAQUIN. The FIRST TIME I COULD HARDLY MOVE …