A Prolonged QT Interval
Is A Potentially Fatal
Drug Side Effect

A Prolonged QT Interval is a potentially deadly side effect of some drugs. This strangely named heart disorder is one of the major causes of sudden cardiac death in people who do NOT have the type of heart disease that plugs up the arteries. This is the type of sudden death that gets front page news when a healthy teenager or professional athlete dies for what seems to be no reason at all.

What is a Long QT Interval 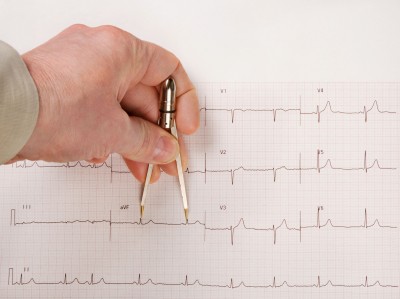 Also called Long QT Syndrome, this drug Side Effect is actually a description of the measurement of the waves that the electrical activity of the heart makes on an EKG or ECG machine. Those 'bumps' or 'waves' that make it look distinctively like a heart rhythm can actually be measured in milliseconds quite easily simply by counting the number of tiny graph boxes. There are several measurements that are made routinely, these are the: 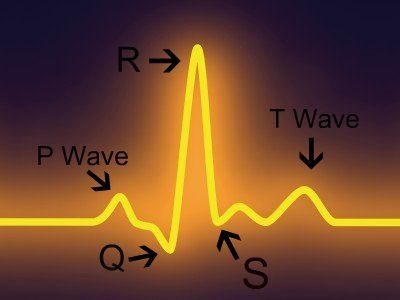 The QT Interval is like the time on the camera flash after you have flashed it and you are waiting for it to build up a charge. On your camera, no matter what -you can't get another flash to go before it's ready, but the heart is a little bit different and under rare undesirable circumstances, the electrical activity CAN discharge BEFORE it's fully 'charged up' again. These rare circumstances are:

When there is a Prolonged QT Interval

A fast heart rate such as from suddenly being scared or from exercise.

This combination can lead to the next heartbeat starting before the system has had time to 'charge up'. When this rare event happens, it leads to a break in the whole electrical system and your heart goes into a condition called 'Ventricular Fibrillation' which will lead to sudden death if the heart is not 'shocked' with a defibrillator back to its normal rhythm ASAP.

Causes of a Prolonged QT Interval

In some cases, a prolonged QT interval is genetic, but in other cases it can be induced by:

While the drugs that cause this problem are well-known and Replacing Magnesium, potassium and thiamine have been shown to be effective strategies in decreasing the length of an abnormally long QT interval- researchers seem mostly focused on the genetic cause of this disease. This is unfortunate because research has not positivity identified the genes responsible for this potentially fatal condition- if it is truly genetic at all- nor do we have the current technology to modify these genes even if we could identify them.

What Can be Done About a
Prolonged QT Interval

Another area of extensive research is in the area of small medical devices that are implanted into the body and give a 'shock' when the heart goes into the abnormal rhythm. Most of these studies have been done to alleviate the high rate of Congestive Heart Failure Death, as this group has an extremely high rate of death from long QT syndrome.

While Inplantable Defibrillators HAVE shown to lower death rates, the American Heart Association admits that decreased Magnesium Levels are the primary cause of the prolonged QT interval that leads to sudden death. And there have been studies that show that supplementing magnesium and/or thiamine in those with prolonged QT interval actually brings the interval back to normal.

But even though these studies have been extremely promising and seems to correct the Underlying Cause of the problem, no large-scale studies have been done on either of these safe and extraordinarily inexpensive nutrients that could correct this problem on only pennies a day. Therefore, the only recommendations that doctors are giving to prevent this problem are supposedly 'antiarrhythmatic' drugs that may actually make the problem worse, or surgically implanted devices.

What Drugs Cause
Prolonged QT Interval

There are a surprising amount of drugs whose side effects include a prolonged QT interval. Unfortunately, one of the largest class of drugs that are culprits for these deadly side effects are antiarrythmia heart drugs- these are drugs designed to STOP these side effects, yet it is being found that they are actually CAUSING them in some cases!

Some of the other drugs that can induce prolonged qt syndrome side effects are:

There is really such a wide variety of drugs that can induce this deadly side effect that you should research each drug individually and find out if the drugs YOU are taking put you at risk for long QT syndrome.

So, if you are contemplating taking one of the drugs that causes long QT syndrome, you ARE increasing your risk of sudden death! Now that you are armed with this information, you can now make an informed decision with your doctor as to whether the benefit of these drugs is worth the increased risks of a Prolonged QT Interval.

Back to Top of Prolonged QT Interval