Osteoporosis Drugs Can
Cause a Broken Femur

While it seems crazy that a Broken Femur could be the result of drugs intended to prevent and treat osteoporosis, that's exactly what some new studies are showing, and the news is bad.

The femur is the large bone that is in the upper part of the leg. This bone is big and sturdy and is designed to take a beating. A broken femur almost never occurs except for two reasons: major trauma such as a car accident, or as a result of taking osteoporosis drugs- drugs that are supposed to make bones stronger.

A femur fracture is so unusual that, In October 2010, the regulating body of the United States placed an FDA Black Box Warning on Osteoporosis drugs that they may increase the risk of a Broken Femur. This warning was placed there after the results of a disturbing study. The study found that, in 97% of all non-traumatic femur fractures (meaning that there was no major accident to the bone), the person with the fracture was on the Osteoporosis drugs known as Bisphosphonates!

While the study stopped short of saying that bisphosphonates were the cause of these fractures, the fact that nearly all people with non traumatic femur fractures were on these drugs is a BIG issue. That these drugs certainly MAY be causing these fractures makes sense when you understand how they work.

Osteoporosis Drugs work by causing loss of old bone cells to slow down. While this sounds good, unfortunately, it isn't necessarily a good thing. Old bone cells are SUPPOSED to die and be replaced by new healthy bone cells. But when you slow the death of old cells, then you GET more and more old bone cells in relation to new bone cells. These old bone cells are often 'stiffer' and denser than newer and healthier bone cells. This higher density 'looks' good on a bone density scan, but the stiffer, older and more denser is more likely to break- like a piece of chalk. Snap! 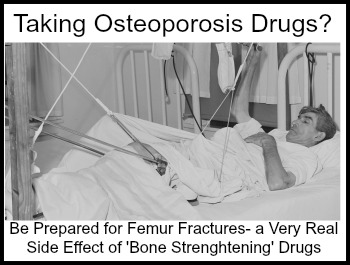 A broken femur is not the first bone problem that these osteoporosis drugs have caused. There is also a higher incidence of a condition called osteonecrosis of the jaw. Just like it sounds, this condition is essentially death of bone cells in the jawbone. Since jaw bone cells reproduce faster than other bone cells, the medication helps to create a condition where more old cells stick around longer causing weakness and damage to the jaw. This terrible condition is extremely painful and requires extensive surgery in order to correct.

Why Osteoporosis Drugs that cause Osteonecrosis of the jaw and Femur Fracture are still being prescribed when correcting the problems that cause osteoporosis in the first place are STILL not being recommended by most mainstream doctors is a mystery. Vitamin D and magnesium deficiency are widespread, even to the point of being called 'epidemic', yet few doctors utilize the widely available blood tests for these two nutrients that have been shown to reduce the incidence of osteoporosis.

Instead, they give only those at high risk an inadequate amount of Vitamin D, usually 600 to 800 IU's per day which is the Vitamin D Requirement researchers often recommend for newborns and not for adults, as well as a high dose of calcium. Unfortunately, Americans already have one of the highest intakes of calcium in the world- yet we also have the highest rate of osteoporosis in the world. Obviously, the problem is NOT one of calcium deficiency or Bisphosphenate Drug deficiency, so why are these considered the standard of care for this problem?

While doctors still seem baffled as to the cause and the answer to bone health problems such as osteoporosis and osteopenia and seem to border on committing malpractice by prescribing drugs with such a horrific outcome as lifelong bone weakening, the alternative community understands how to prevent and treat bone problems. Here's how to at least start taking care of your bones:

Keep reading to find out why you need to avoid heartburn medications if you want to preserve your bone health.

Back to Top of Broken Femur