Why You Shouldn't Be Using
Chlorhexidine Mouthwash

That’s right, almost no one should be using Chlorhexidine Mouthwash, despite the fact that your doctor probably told you to use it, and you believe that killing 99.999% of germs in your mouth is a good thing.

But the truth is that it's is not good for you at all, and may be seriously detrimental to your dental health. In fact, just like all other antibacterial mouthwashes, these rinses could also have long-term consequences to your overall health, including leading to high blood pressure and heart problems.

Just like the other mouthwashes you buy in drug stores, Chlorhexidine mouthwash also does an excellent job at killing germs in your mouth, but this may not necessarily be a good thing. We all recognize that having antibiotics killing the Good Bacteria in our gut isn’t such a good idea because the sum total of the bacteria in our gut, known as the microbiome, performs important functions and we can get overgrowth infections such as Intestinal Candida when we upset this balance.

Well, the mouth has a microbiome too. Only a few bacteria, however, have been associated with cavities and periodontal disease, yet 'they' tell us that having virtually any bacteria in our mouth is bad. We know that some of these ‘germs’ that these antibacterials are killing have important functions.

One set of bacteria that live in the deep crevices of the tongue perform produce a substance called Nitric Oxide. Don’t confuse this substance with Dental Nitrous Oxide, which is completely different. Nitric Oxide, also called NO, is an important natural chemical that is able to effectively regulate blood pressure and create mucus in the stomach that protects us from harmful bacteria and ulcers.  In fact, many people take supplements designed to help the body produce more nitric oxide. 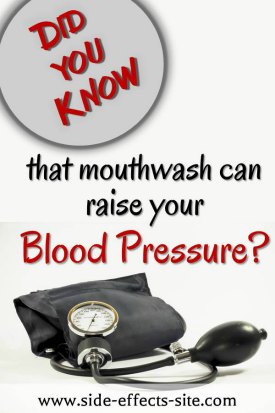 There are at least 3 studies have shown that using chlorhexidine mouthwash kills these bacteria in the mouth(1). Even MORE interestingly, using this antibacterial rinse actually eliminated the production of nitric oxide, causing blood pressure to rise within just a few days(2). I wonder how many people using dietary supplements for nitric oxide production also use Antibacterial Mouthwashes that abolish the bacteria that produce nitric oxide!

This Mouthwash is Quite Toxic

I’m certain that no one who uses chlorhexidine has read any of the studies on how toxic it is, because if they did, they certainly wouldn’t continue to use this mouthwash. In fact, it’s even been used in clinical studies as an agent designed to damage cells so that they can test to see what drugs can prevent or heal the damage from chlorhexidine best!

“CHX was demonstrated to exhibit cytotoxicity that could
disrupt the stable cellular redox balance, resulting in
increasing levels of free radical generation and subsequent
cell death. CHX has significant potential for cytotoxicity”
Assessment of the cytotoxicity of chlorhexidine by employing an in vitro mammalian test system

What is quite concerning about the toxicity of chlorhexidine is that not only is it toxic to several different types of cells in the mouth, including cells that build healthy gums, skin cells(4), ligaments, collagen, and dental pulp;  but these toxic effects continued for up to a week after the chlorhexidine mouthwash was rinsed off.(3)

Like the antibiotic class known as the Fluoroquinolones, this cell death is accomplished through the generation of free radicals, which do mitochondrial and DNA Damage and can permanently damage cells.

Chlorhexidine Isn't Even
That Effective

With all of the detrimental effects of Chlorhexidine, you’d think that it must be some incredibly powerful substance that is so good at killing germs that the benefits must outweigh the risks, right?

Unfortunately, not only does chlorhexidine encourage the formation of tartar, something that you likely are using mouthwash in order to AVOID, but two studies question its use for any surgery where pulp or bone is exposed, since its toxic effects might delay healing.(5)

"Chlorhexidine also encourages supragingival calculus
formation and the resulting calcified and stained areas
adhere strongly to the tooth (or restoration) surface
and are difficult to remove."
Antibacterial agents in the control of supragingival plaque

For ‘regular’ usage of inhibiting cavities and protecting against and healing from periodontitis, there are a multitude of studies showing that there are several common and cheap ingredients easily found in the grocery store that are safer and just as effective as chlorhexidine. 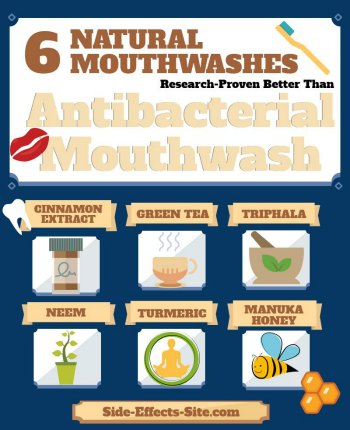 Despite it being considered 'The Gold Standard' (11), it seems that just about any natural antibacterial substance tested was more effective.

That's almost certainly because chlorhexidine is toxic and damages your delicate mouth tissues, while the natural substances have thousands of years of history of safe use as anti-inflammatory foods.

If you are now convinced to give up your Chlorhexidine Mouthwash and use something else, it’s unlikely that you’ll find any mouthwashes containing any of the above ingredients at your local grocery store.

Instead, why not make your own mouthwash for pennies combining two or more of the ingredients above? Not only will they work better, but it will taste better since chlorhexidine is notorious for it's terrible taste.

Xylitol, a non-sugar sweetener, doesn’t beat chlorhexidine in head to head competition(9), but there are dozens of studies showing that it reduces plaque and cavities, and has some other positive Xylitol Side Effects that make it a beneficial addition to the diet. I personally use a green tea and xylitol rinse that tastes great,  costs just a few cents to make, helps my body CREATE nitric oxide, and have almost no Green Tea Side Effects to worry about.

Doesn't it make more sense to use a food that is both safe to swallow and for your children to use and swallow rather than a toxic chemical that you have to spit out and worry that your children are swallowing it?