Aspirin Side Effects
Are Serious and Even Deadly

Everything that you should know about Aspirin Side Effects will be discussed right here in a few minutes. But first, what is aspirin anyway. Aspirin is an 'over the counter' drug, meaning that it does not require a prescription, pain reliever and anti fever medication that has been used since the 1800's. It was originally derived from a substance found in Willow Bark that has been used as a mild pain reliever for centuries.

Aspirin is NOT the same as Tylenol, and neither are the same as Ibuprofen or Motrin. All three are separate drugs that have very different modes of action and the Over the Counter Drug Side Effects are each different. Please read each individual page if you are interested in learning more about:

In the English language, people will often say that they are going to 'Take an Aspirin' even if they really mean Tylenol or Ibuprofen. When this site states 'Aspirin', it means Aspirin- it is NOT interchangeable with Tylenol or Ibuprofen or any other over the counter pain reliever. 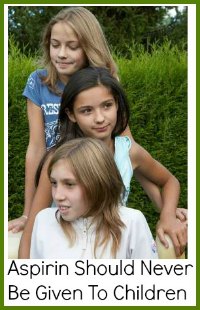 Since aspirin, like Ibuprofen and Tylenol, is so widely available in just about every drug and grocery store across the country, most people assume that aspirin is extremely safe. But is this really true?

Just because drugs are sold without a prescription and are widely available does NOT mean that they are safe. And aspirin therapy is a 'Case in Point' for this. Aspirin therapy is NOT safe, and could even be considered extremely dangerous. While everyone is warned about and knows about Vitamin D Overdose, a child could take an entire bottle of Vitamin D and not be harmed in the least! Aspirin therapy is not nearly as safe, and an overdose on aspirin is very likely to cause severe harm and probably even death in most cases.

"…a recent large survey has listed aspirin
among the ten drugs most frequently involved
in adverse reactions."
Analgesics, Allergy and Asthma

Just because this study is old, though, doesn't make aspirin any safer. While aspirin doesn't make the top ten most dangerous drug list anymore, that's only because there are many more dangerous drugs now. But not being in the top 10 doesn't make it 'safer'. On the contrary, the total incidence of Side Effects is likely to be higher because of its widespread use and larger NUMBERS of people taking it!

Just like the other drugs and nutrients on this site, only the most relevant and important Aspirin Side Effects will be discussed. All drugs, nutrients and even placebos have Common Side Effects like nausea, dizziness, etc. Side Effects Site will not be discussing those. But here is the first side effect of aspirin that you are not likely to hear about anywhere else- even if you are at risk….

One of the aspirin side effects that you may have NEVER heard of, but that is QUITE common, is aspirin induced asthma. In those who already have Chronic Asthma, aspirin and asthma just do not mix. Up to 25% of adults and children with asthma, may have aspirin induced asthma- and many don't even know it! And this is NOT a case where aspirin makes the asthma worse, but the aspirin actually INDUCES an asthma attack. Sometimes these asthma attacks can be deadly.

In fact, one study looked at people who came into the hospital with asthma and ended up on mechanical ventilation life support. The conclusion was that approximately 8% of these people were victims of aspirin induced asthma!! And the worst part is that this fact is NOT well known- even among asthmatics. So, many of these Aspirin and Asthma cases may not even know that is their problem!

The sure-fire solution to this problem is easy.... don't take Aspirin, Ibuprofen, or other 'NSAID's' if you have aspirin induced asthma. Now you know!

One of the side effects of aspirin that is serious but EXTREMELY rare is Reye's Syndrome. While it occurs without aspirin use as well, it is almost primarily seen in children who were given aspirin for high fever during a viral infection. Since this was discovered, and parents were educated not to give their children aspirin, Reye's is rarely seen anymore.

Do not give children with fevers any aspirin or aspirin containing products.

Bleeding is one of the aspirin side effects that is most serious and most well-known, but that is rarely taken into consideration as a problem until AFTER the person has had a bleeding episode from aspirin. Since aspirin thins the blood and is also an irritant to the stomach, it can cause damage to the stomach and/or small intestine that leads to ulcers.

As if this problems are not bad enough, sometimes these ulcers will cause bleeding, and bleeding ulcers are NOT a good thing to have, yet taking aspirin daily, even when it is prescribed by your doctor, gives you about a 70% greater risk of bleeding. While occasionally ulcers bleed slowly and go unnoticed only to be found when a person is found to be anemic, often these ulcers cause SEVERE bleeding that requires a trip to the emergency room, blood transfusions and an overnight stay in the hospital. Bleeding ulcers are serious business that almost always require an emergency procedure to stop the bleeding, or even surgery.

In some cases, the bleeding is SO bad and so much blood is lost that death is the result. Many people are extremely sensitive to bleeding from aspirin and need to avoid aspirin completely. Even children can have bleeding when given aspirin. Bleeding as one of the aspirin side effects is serious business that can have devastating effects.

Summary of Aspirin Side Effects

So, these are some of the more serious consequences of aspirin usage. Before you take Aspirin, please decide for yourself if the risks of these Aspirin Side Effects are worth the potential benefit for you in the long run. If your doctor has prescribed aspirin, then at least reduce the risk of bleeding by taking the minimum dosage possible and by using 'Enteric Coated Aspirin' which is much less irritating for the stomach.

While it may seem like it’s a good idea to bring down childrens' fevers with an over the counter medication like aspirin, this is not at all safe, and it should NOT be done. However, before you think that Tylenol or Ibuprofen is a good alternative, be sure to understand the side effects of those drugs as well. So keep reading to find out about the Side Effects of Tylenol before you decide that's a better idea...

Next --->
Tylenol Side Effects

Back to Top of Aspirin Side Effects