Tylenol Side Effects
Are You Sure You're Safe?

If you take Tylenol, you should be aware of the Tylenol Side Effects that could be devastating to you and your family. Tylenol is a pain and fever reliever that can be bought 'over the counter', meaning that it does not need a doctor's prescription in order to be purchased. It has been used as a pain reliever since the late 1800's, but has only been for sale to individuals since the 1950's.

Tylenol, also called Acetaminophen and Paracetamol, is also an ingredient in MANY other over the counter and prescription medications and is considered an extremely safe drug. Therefore, it is marketed as safe for even the youngest children- particularly for fever- and there is even an 'Infant Formula' marketed to be given as a safe pain and fever reducer for infants and children. Both formulations are given EXTENSIVELY in hospitals and doctor's offices for pain and fever reduction in adults, children, infants and even newborns.

Does Tylenol's long history of use and wide acceptance in the medical community and the extensive commercials citing it's safety, really mean that it IS safe? Well, for most people in most cases, it seems safe. But it's not so safe if you are one of the people who gets Tylenol Side Effects that could be devastating and even deadly. In fact, it's estimated that approximately 100,000 deaths per year occur from acetaminophen usage. (3) If this were a food or supplement, it would likely be considered quite dangerous, maybe even too dangerous to be sold without a prescription!

From liver failure and kidney failure to the more 'subtle' side effects of Increased Intestinal Permeability that predispose people to autoimmune diseases, there is just simply no way of knowing who will be affected by these devastating Side Effects of Tylenol.

However, those that experience the side effects of Tylenol often have risk factors that include a history of:

Liver toxicity is one of the most well-known, but least talked about of the Tylenol side effects and the United States has placed an FDA Black Box Warning on Tylenol to warn of it's dangerous effects on the liver. This condition, also called hepatotoxicity, can cause just a small amount of liver damage that is virtually unnoticeable, all the way to complete liver failure that requires a liver transplant, and anything in between. And Tylenol use is one of the MAIN CAUSES of non alcoholic liver failure in the US!  In fact, among all drugs sold in the US, it is the Number 2 drug that most often causes liver problems (4).

While the vast majority of people don't end up in the hospital with liver failure, Tylenol DOES cause some degree of liver damage every time that you take it- and that damage is worsened with alcohol use. Human livers are remarkable in their ability to regenerate, and therefore healthy people are unlikely to notice the tiny amounts of liver damage that occur if they take Tylenol infrequently.

But those who take Tylenol on a regular basis, even at 'recommended' dosages are at GREAT risk of liver damage as the usage accumulates until the damage becomes apparent. It will SEEM as though the liver damage just happened 'one day' but it is due to a constant small amount of damage to the liver with each usage. And taking both Tylenol and using alcohol, even infrequently, compounds this damage if they are both used.

You are now aware that Tylenol side effects put you at risk for liver failure, and you probably already know that alcohol harms your liver, but did you know that Tylenol and alcohol together put you at risk for liver failure in an amount GREATER than the two of them separately? This is a situation known as 'potentiation'. Potentiation is when 1+1 doesn't equal 2, but equal 3 or even more!

The amount of damage to your liver that taking alcohol and Tylenol or Acetaminophen can do is greatly enhanced when you take them together. So, if you drink alcohol, even in small amounts, or you feel the need to reach for a pain-killer after a night of overindulging in drink, think again. Reach for Ibuprofen instead- or better yet, take Turmeric, enzymes, or just drink lots of fluids and tough it out. A miserable day with a headache is far less miserable than a miserable day with liver failure from taking that Tylenol when drinking alcohol which is a distinct possibility with this unique set of Tylenol side effects.

While Tylenol has long been considered the one drug that a pregnant woman could use safely for pain or fever, this may not necessarily be true. New information has come to light that use of Tylenol in pregnancy could be a risk factor for the child's later diagnosis of AHDH or hyperkinetic disorders (2).

Tylenol side effects in children

Despite Tylenol's seemingly 'safe' impression, it has NOT been tested with the randomized double-blind placebo-controlled studies, known as RCT's, that doctors and scientists SAY they require in order to determine if something is safe. If Tylenol were brought onto the market as a new drug right now, researchers would say that there is just not evidence to declare its safety for use in children.

Yet, we take it for granted that we are doing the best thing for our children by giving them Tylenol when they have a fever or are in pain. But children HAVE died of liver failure, or been put on the transplant list, from 'recommended' dosages of Tylenol. And in fact, the FDA's scientific consultants recommended, in 2007, that the FDA recommend that children under 6 years old NOT receive Tylenol- the FDA chose to ignore their scientific consultants in this matter. A study that wanted to see why there was such a discrepancy between doctor's and parents perception of safety and the FDA panel's perception of the harmful nature of these drugs agreed that they have NOT been proven to be safe for children- and since Aspirin Side Effects include a serious condition called Reye's Syndrome, aspirin should not be given to children either. 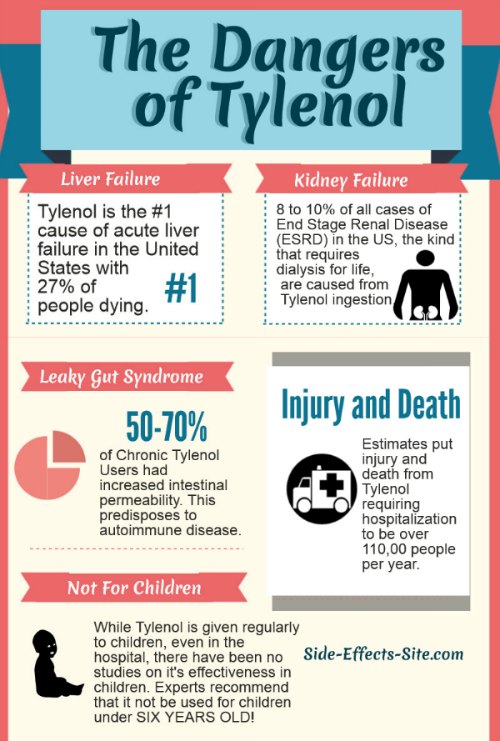 "...a risk-benefit analysis clearly suggests that
the use of these products in children younger than
six years of age should not be encouraged or supported.
Furthermore, parent education about the self-limiting
nature of coughs and colds and the lack of efficacy
of these drugs is needed"
What is the evidence for the safety and efficacy of over-the-counter cough and cold preparations for children younger than six years of age

Notice that they used the phrase "… lack of efficacy…". That means that these drugs haven't even been proven to WORK in children either! So, in children under six years old, giving these drugs is exposing them to Tylenol side effects that can be dangerous and even deadly- simply because you feel the need to 'do something' for your child when they are sick- even if that 'something' hasn't been shown to work! Even more seriously, a recent study showed that over 40% of parents dose their children incorrectly, allowing even more opportunity for serious, and even deadly, problems to occur.

One of the relatively unknown Tylenol Side Effects is kidney damage and kidney failure. While it is more likely to happen in adults who have used Tylenol regularly over long periods of time, it has also occurred in children. Kidney damage can be VERY serious business, potentially leading to the need for lifelong dialysis and/or a kidney transplant.

"...acetaminophen may accumulate in the renal
medulla— causing tubular necrosis and renal toxicity..."
Antipyretic Treatment in Young Children With Fever

But even in those who don't end up on dialysis, studies that look for it often find mild unnoticeable kidney damage to a significant number of people in the study(1). While this tiny amount of damage may not matter over the short-term, someone who takes Tylenol regularly may have long-term liver or kidney problems that these short-term studies just simply can't look for. This was highlighted recently when several American professional basketball players, including Alanzo Mourning and Sean Elliot, developed kidney disease. These drugs DO have their consequences!

The vast majority of Tylenol given to children is for fever. Before the days of widespread Tylenol usage, mothers would sponge their children off with room temperature water to cool them down. This very safe practice has gone by the wayside in favor of potentially dangerous drugs. Even just taking off the child's clothes when they have a fever will help to bring a mild fever down.

While the movies often show people being submerged into ice cold tubs for high fevers, this practice is completely unnecessary, potentially harmful and certainly uncomfortable. The body's sweat is designed to bring high temperatures down during exercise, and therefore a room temperature sponge bath or real bath is usually very effective at bringing temperatures down- and what is often used in the emergency room for small babies with fevers anyway.

Adults can do the same as well. And in adults, where the risk of a high fever is not as great as in children, if you are otherwise healthy, you can simply let the fever 'take its course'. A fever is often generated for a reason, and suppressing a fever may not always be the best course of action.

Alternatives to Tylenol for Pain

While Ibuprofen (Motrin, Advil) is also used as a safer alternative to Tylenol, Ibuprofen Side Effects offer their own problems.

But there ARE natural alternatives to the problems of Over the Counter Drug Side Effects, and believe it or not, Vitamin D Deficiency and Chronic Pain is a HUGE problem!! Take a look at these natural products that can effectively reduce pain and inflammation:

So, despite the risk of Tylenol side effects being low, they can be EXTREMELY dangerous and even life threatening. Is the risk of harmful side effects worth the feeling that you are doing something good for yourself or your child- when it reality, you may be actually doing more harm than good?

Next --->
Ibuprofen Side Effects

Research Cited for Tylenol Side Effects